The Nederlands Fotomuseum presents Threshold Space: three projects from interdisciplinary artists in the windows of the museum. The projects will become visible after sunset. Threshold Space will open ahead of the exhibition of the Gallery of Honour of Dutch Photography, the Eregalerij. Literally on the threshold of the museum, before entering the building, the three artists will present their vision on the concept of the Eregalerij. What counts as a photograph and what does not? What are the borders between photography and video art? What exactly is Dutch photography? The exhibition Threshold Space has been curated by students from the Masters of Photographic Studies at Leiden University in response to the forthcoming opening of the Eregalerij of Dutch photography. The students are: Anne Bousema, Conal Gilliland, Noemí Pascual Herrero, Minke van der Maas, Fiepke van Niel and Lili Wallis.

Soyun Park, in collaboration with Inwoo Jung, will give a platform to all digital vernacular photographs that were not included in the Eregalerij. Tyler and Sebastian Koudijzer address photography with poetry and Baha Görkem Yalim explores the medium of photography through video. Altogether, the artists take over the windows by presenting their visions on the Gallery of Honour of Dutch Photography.

Exhibition
Starting the 21th of January, a unique group exhibition is on display with the works made by artists Baha Görkem Yalim, Soyun Park and Tyler and Sebastian Koudijzer. As soon as the sun sets, the works by Yalim, Park and the brothers Koudijzer will come to life. The exhibition is part of Nacht in, Dag uit (Night in / Day out), a project of the Nederlands Fotomuseum in which artworks are projected on the windows of the museum from sunset till sunrise, seen from the streetview. The night exhibition can be seen from the 21st of January until the 18th of March 2021. 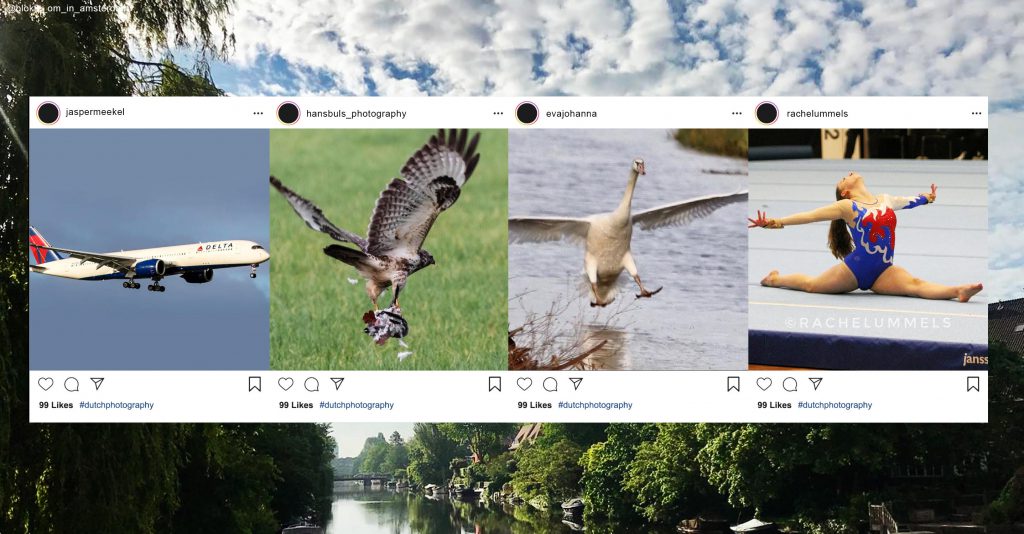 In the Middle of Attention © Soyun Park

Soyun Park | In the Middle of Attention
In the video work In The Middle of Attention, Soyun Park explores what it means exactly for a photograph to be meaningful for the history of Dutch photography. By roaming through different hashtags on Instagram, such as #dutchphotography, Park gathered an enormous amount of Dutch photographs. The approach by the artist results in two different layers of curating the images. First, a large amount of photographs is extracted by the artist via a hashtag filter, resulting in an autonomous self-curation of the Instagram users which is embraced by the artist. Secondly, Park herself organises the photographs and transforms them into a moving image format, thus creating a second layer of her own creative and experimental curation with the help of the general hashtag. The artist used this collection of images to humorously embrace the endless stream of visual material as a part of the history of Dutch photography.

In relation to the stream of images in Park’s work, an interesting critical attitude arises regarding the question of what makes a certain photograph a ‘better’ photo than another. Sometimes a photograph of great historical value is visually less strong. Furthermore, to what extent is something defined as a ‘Dutch’ photograph? Does Park, living and working in The Hague but originating from South Korea, fall under the criteria of a ‘Dutch’ artist? The title ‘In the Middle of Attention’ ironically refers to each image that did not have the chance to become part of the Eregalerij.

For In the Middle of Attention Park additionally collaborated with sound artist Inwoo Jung. Jung created a live soundtrack to accompany the video installation by Park. The soundtrack can be listened to simultaneous with the work on the windows of the museum by scanning the QR code or down below.

Biography Soyun Park and Inwoo Jung
Soyun Park (South Korea) is a multidisciplinary artist and designer living in The Hague. She is also a founder of RGBdog, a studio bridging technology and sound with visual arts. Park is interested in the question of how technology influences human functioning, from the individual level (physical movement and relationships) to the social level (architecture and politics). Often in collaboration with sound artists, her work takes the shape of videos, installations and audiovisual performances. By making use of new media and technology, Park’s work investigates the border between the digital world and reality, which is getting thinner every day.

Inwoo Jung (South Korea) is a multidisciplinary artist based in Cologne. Approaching a delicate balance of textures of sound, he fuses synthetic sounds with natural sounds in his work. Jung uses samples, electronic sounds, as well as field recordings and voices to create different narratives. Tone painting and sculpting as Inwoo’s stylistic means of storytelling creates synesthesia with a non-verbal linguistic tone.

By rows and windows © Tyler and Sebastian Koudijzer

Tyler and Sebastian Koudijzer | By rows and windows
‘Door roeien en ruiten’, roughly translated as the phrase ‘by any means’, is a project by the brothers Tyler and Sebastian Koudijzer that closely relates photography and poetry. The project is a continuation of the earlier project ‘JAMPA’, which consists of photographs selected by the artists from the archive of the Nederlands Fotomuseum that were powerfully brought together in a collaboration with words. The images selected by the brothers in combination with the play of words, give insight into the story of the journey of their ancestors from Java, through Suriname, to the Netherlands. For the project the artists found Javanese traditions and customs in the archive that are disappearing in our surroundings more and more. In addition, through the project the two brothers found a lost family heirloom and a new sense of connection both with each other, their background and their culture.

‘Door roeien en ruiten’ once again shows a strong relation between image and words. This time the artists explore the powerful relationship of image and word through an interplay of their own text with images taken by themselves, the latter standing on a border between still and moving photographs. With nostalgic pride the duo explores the ancient Javanese way of living called Kejawen, previously only known to the artists as ‘The Hidden Force’. Inspired by the film adaptation of the book known by the same name, written by Louis Couperus (1900), Tyler and Sebastian Koudijzer shed an alternative light on the bathroom-scene.

In a distinctive way the brothers Koudijzer question and investigate the forgotten history and traumas of the Surinamese-Javanese community in the Netherlands. Their work presents an important project within the Dutch photography scene, with the power of the project residing in the collaboration between photographic images and words.

Biography Tyler and Sebastian Koudijzer
Tyler (1990) and Sebastian (1993) Koudijzer are two Rotterdam born brothers who bring poetry and photography together. In March 2020 the two brothers started on Instagram with the project Dicht bij: Tyler & Seb, as a reaction on social distancing. In order to be able to still meet from a distance, they reacted for a continuous 30 days on each other’s artistic practices. Sebastian would send photographs to Tyler, to which Tyler would react with a poem, or the other way around. In May 2020 the two artists started with the project ‘JAMPA’, diving into the archive of the Nederlands Fotomuseum in search for photographs that would represent the journey of their ancestors.

Baha Görkem Yalim | Grey Immanence
'Grey immanence' is a video installation inspired by a thirty-second scene in Bela Tarr’s final film 'Turin Horse' (2011). In this scene, near the end of the film, an oil lamp can be seen that is slowly burning out until nothing but a black space remains. Refilmed by the artist, the scene is reimagined in a longer duration and presented as a loop. The artist's metaphysical interest and the work’s main focus lie at the core of film and photography as mediums: light. From this focus, we arrive at a moment where the fiction of the object becomes real, as the lantern in the film functions as a real lantern through the relation the medium has with light and duration. Having recreated the image of the lantern in a different context as a ‘slow video’ that is constantly on loop, at moments seeming like a still photograph, the work touches upon light as the essence and binding factor of photography and film. The question ‘what is considered as photography and what is not?’ is particularly interesting in this case.

The work will come to life best when the sun is down, since the darkness of the night makes the lamp literally function as a source of light and thus the function of the object acts exactly like it is intended to. The title refers, in the same sense as ‘immanence’, to this state of something being inherent or exclusively existing within something. The project addresses the function of the lamp as a lamp in itself, but also, on another level, as ‘light’ as the essence of the medium of photography and film.

In relation to the concept of the Eregalerij, the artist is furthermore interested in the metaphor of the oil lamp in the film by Tarr to mark an ending. The oil lamp recreated by Yalim functions as a gentle remark on a linearly selected history in a concept like a gallery of honour, where progress and improvement in technique is celebrated in chronological order and history is marvelled from a ‘better’ future. The metaphor for an end gains new meaning for the artist in today’s reality, with a plurality of crises including a global pandemic, economic collapse, late-capitalist exploitation, climate emergency and a refugee crisis. Literally on the threshold of the inside and outside of the museum, Yalim likes to think of the oil lamp as both a signal of danger and a home for excluded artists (and people in general), similarly to a  lighthouse.

Biography Baha Görkem Yalim
Baha Görkem Yalim (1987, Izmir) is a visual artist living in Amsterdam. After working as an engineer, Yalim completed a Bachelor of Fine Arts at the Gerrit Rietveld Academie, Amsterdam. They finished two master programmes, namely Art and Research at the Gerrit Rietveld Academie and the University of Amsterdam and Art Praxis at the Dutch Art Institute (DAI). Yalim’s practice is multidisciplinary and defined by being purposefully in flux, refusing to crystallise in any one form or medium. Yalım employs video, sculpture and performance, sometimes in variations and always as folds of the one and same practice. At times their position also expands to writer, educator and curator, and includes the production of texts including poetry, fiction, and academic reflection. Yalim’s practice is deeply tied to art history, its readings, re-readings, and misreadings. Through the perspective of gender and labour, Yalim explores concepts such as objecthood, history and artistic contamination.

The gallery of honour of Dutch photography
The Collection illuminated ... by Artificial Intelligence
Imagination