The nominees for the Steenbergen Stipendium 2020, the prize for talented photographers, have been announced. The jury has nominated five art academy graduation projects based on the final exam exhibitions that took place in autumn. “What did we look for? Quality, quality, quality. Naturally, that is an abstract concept, but it came down to looking for professionalism and photographic craftmanship, and being strict on visual clichés,” says jury chairwoman Merel Bem.

The nomination of the projects also signals innovation within photography and provides insight into how the new generation uses the medium. The exhibition in the museum serves as a measure of the development of photography talent in the Netherlands. “We follow trends in photography closely and love to show them; that is why we are delighted with this exhibition on display in our museum,” says Birgit Donker, director of the Nederlands Fotomuseum.

An unusual year
The world seems to have turned upside down this year, so it is not surprising that the judging process for the Steenbergen Stipendium was different from all previous years as well. For a long time, the jury was not even sure if they would be able to view the graduation work at all. However, the invitations from the study programmes gradually came in, and they were able to get started after a few months delay. “It’s admirable how most academies and their students still managed to organise a quality presentation, collaborating with local initiatives: the HKU with Fotodok in Utrecht, St. Joost with old factory halls in Breda, and the Rietveld with Foam in Amsterdam,” says Merel Bem. The Willem de Kooning Academy in Rotterdam had cancelled their graduation exhibition this year, so they were not part of the 2020 edition. “Four academies remained, which we visited with great pleasure and attention, as always.” These are the Gerrit Rietveld Academy in Amsterdam, the University of the Arts in Utrecht, the Royal Academy of Art in The Hague, and St. Joost in Breda.

The nominees
These are the five nominees. The jury provides a brief explanation of each work. 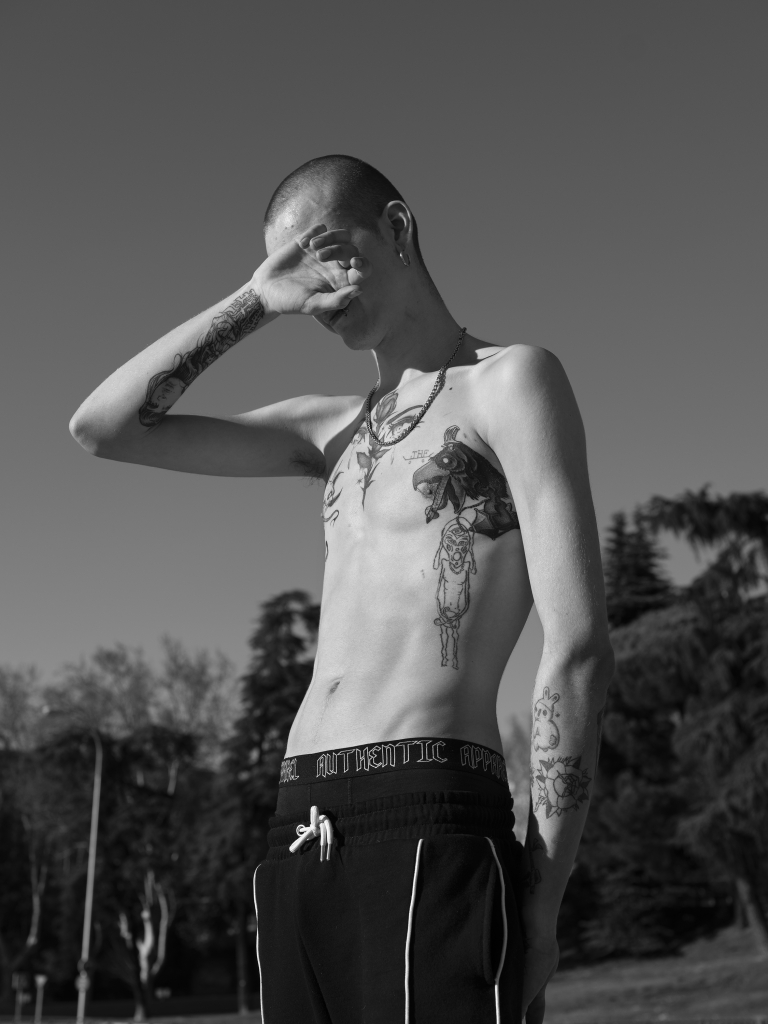 In 1977, the left and right parties in Spain concluded the Pacto del Olvido (‘Pact of Forgetting’). Their aim was to end the fascist era of Franco and start a new, democratic society. As a result, history was rewritten. Old crimes were obliterated. An alternative reality emerged. Bebe Blanco Agterberg reflects on that period in her project A mal tiempo, buena cara / In bad weather, a good face. In striking black-and-white photographs presented in an installation and in a book, she sketches a society struggling with a past that ceased to exist from one day to the next. How do you shape such a society? What memories replace the erased ones? And who decides which memories should disappear and which ones should stay? In a natural way and with attention to proportions, Agterberg combines Spanish archive photos with her own work, which alternately has both a staged and a documentary, classic in character. 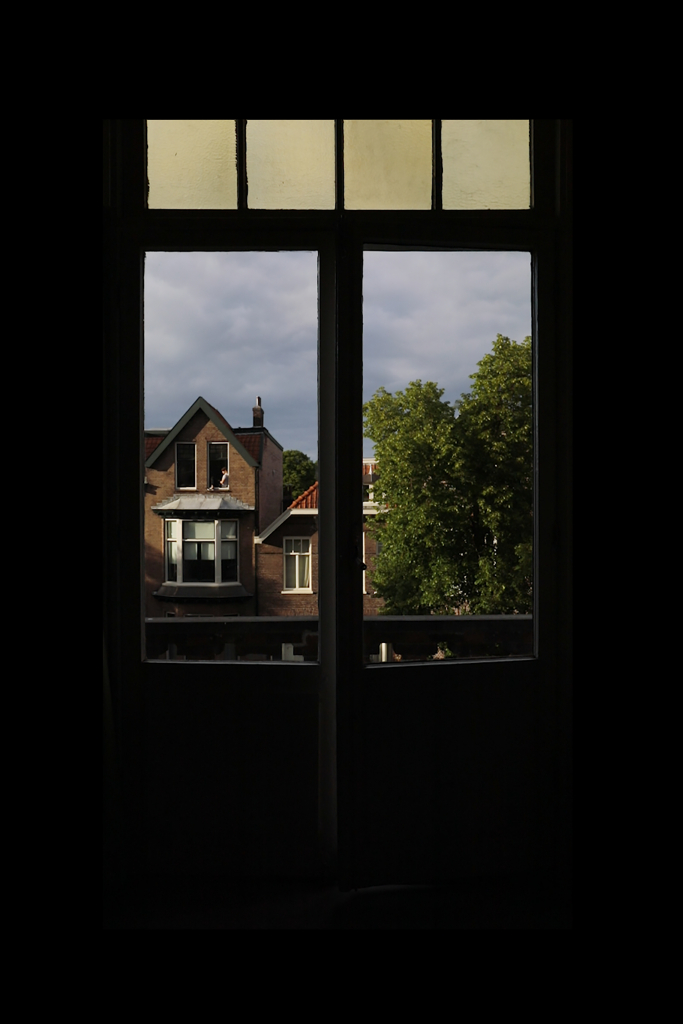 A Room Within © Nathan van Ewijk

Nathan van Ewijk (1995, the Netherlands), A Room Within
University of the Arts, Utrecht

Of all nominated works, Nathan van Ewijk’s film makes the strongest reference to quarantine and the endless staying indoors that we have experienced in 2020. At the same time, A Room Within transcends that theme – the film is part of a young oeuvre that is already still and meticulous on its own, and purposefully registers the wondrous within the everyday.
Van Ewijk placed a video camera in front of the window of his house and the view from it: a house, a tree, the sky with clouds. It could hardly get any simpler. With an incredible focus on detail, he captured what happens when the day slowly fades into the evening, when the window is open and the wind picks up, when a fly walks on the glass, and the sounds from outside seep in – no ground-breaking events, but nothing to be missed for those who intend to pursue the life of an observer. Van Ewijk does not follow a complicated storyline; the window is the narrator.
It seems as if he does not steer the viewer in any way, as if he also makes them drift on a bit, but that is an illusion. Van Ewijk does direct the spectator, albeit in a very subtle way. He lets the shot of his window and the installation around it exactly coincide, so that it feels as if you are looking directly outside from the exhibition space. The three yellowish upper windows were also captured in that hyper-realistic, almost painterly way. The whole is illuminated in such a way that the view sometimes feels reminiscent of a scene by Carel Willink: balancing on the edge of real and surrealistic.
The entire work of art is a trompe l'oeil – on the one hand misleading you, and on the other hand offering a kind of calming, meditative experience, where the quality of the sound also merits a mention. 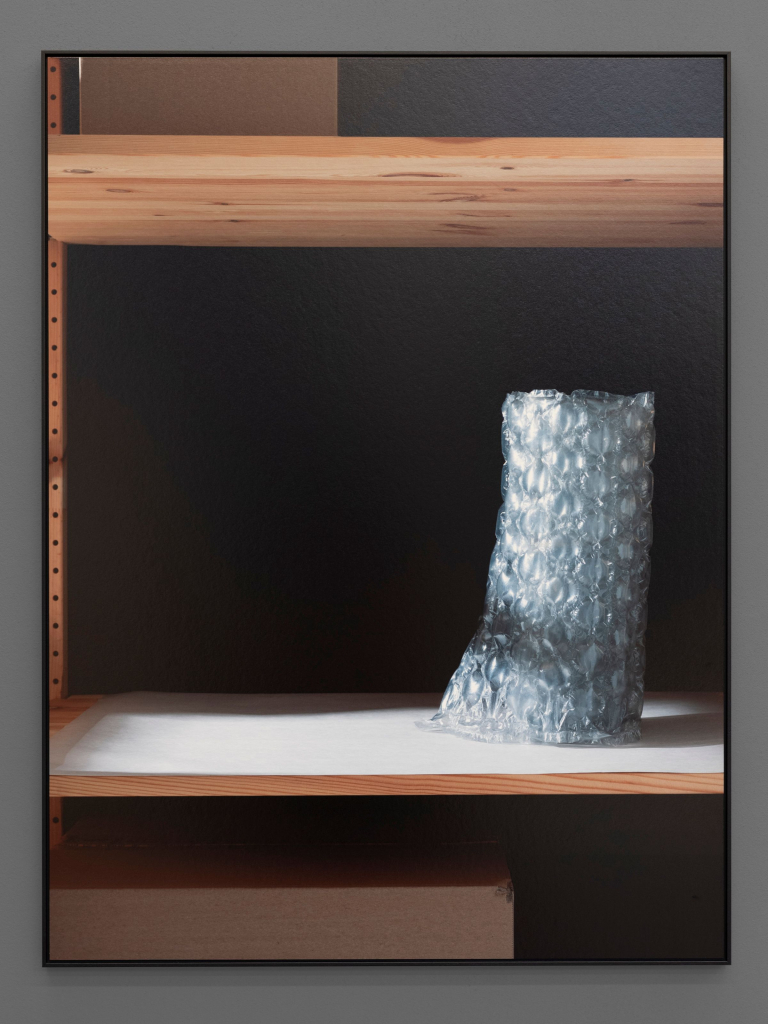 Suzanne Schols (1985,the Netherlands), Polite Fictions – Behind the public face of diplomatic gifts
Royal Academy of Art, The Hague

Polite Fictions is an investigation into the transparency of international political traffic, which, as it turns out, is not transparent at all. Suzanne Schols found in the diplomatic gift – the polite, seemingly trivial, but oh so meaningful ritual gift that is exchanged when the representatives of two countries meet – the perfect symbol for that apparent publicity. When she wanted to dive into the world of diplomatic gifts, it turned out that the Dutch government and the European Commission did not want to give her permission to photograph the various objects. There are already lists, and images – sure, but everything is encapsulated with restrictions, rules, and secrecy. So, what now?

Schols decided to tell this story in two different ways, which gradually intertwined and reinforced one another. One way was the factual one: the photographer functions as an investigative journalist who accurately shows what you encounter when you want to portray this subject. She collected every refusal, every negative answer to the question whether she could come and photograph gifts, often with important stamps and signatures. She collected every shred of information about diplomatic donations – press photos (President Trump wearing a personalised Brazil national football team T-shirt, donated by President Bolsonaro), catalogue images, and lists with detailed descriptions.
The other way in which she approached her subject was the fictional one. Her staged, cinematic scenes of carefully wrapped objects – one in bubble wrap, the other in black tissue paper – are tantalising portrayals of the cautious policy on diplomatic gifts. By photographing objects in this exciting, mysterious way, Schols manages to temper the aroused curiosity of the viewer: wrapped and illuminated in this way, the ‘gifts’ are reminiscent of intriguing sculptures, and their content no longer matters. 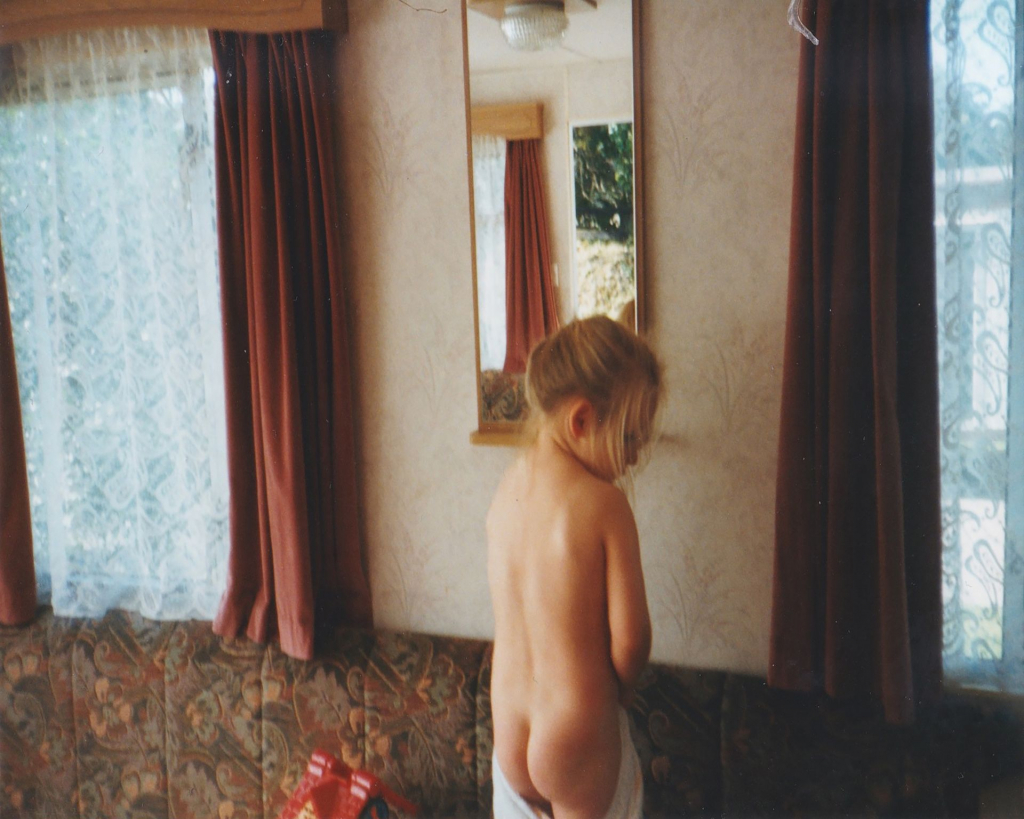 The Road to Purgatory  © Ashleigh Wilson

How do you connect your own personal life to the turbulent history of the country in which you grew up? The Northern Irish Ashleigh Wilson does this both visually and with words. Her project The Road to Purgatory consists of three parts: a photographic part, a cinematic part, and a text part. All three recount the protracted conflict in Northern Ireland, ‘concluded’ in 1998 with the Good Friday Agreement signed by the governments of the United Kingdom and Ireland. After that important step in the peace-making process, people wanted to focus on the future. The past had to be forgotten, with the result that truths, people, and stories disappeared. With The Road to Purgatory, Wilson attempts to give a voice to those lost social elements and thus offer space for alternative perspectives on life ‘after’ the conflict. The quotation marks are there, also in Wilson’s own texts, for good reason: that violent chapter has of course never been closed, as it still lingers on in today’s society.
Wilson’s photographic section consists of everyday childhood photos from her personal archive, which she combined with detailed shots of the local government building, symbolically captured on old black and white film rolls that expired in 1998. Her short film is a fragmentary collage of three small, private histories that together tell a larger story about the impossibility of rigorously closing the past. The images are alternately poetic (the green, rainy Irish landscape, the river) and banally mundane, sometimes almost inferior (a woman at a gas station, filmed from the backseat; shaky, covert images of a funeral home that appear to have been made with a cell phone). The whole has a slow, photographic quality. The voice-over is enchanting. The intriguing text is Wilson’s forte, perhaps even more important than her images. 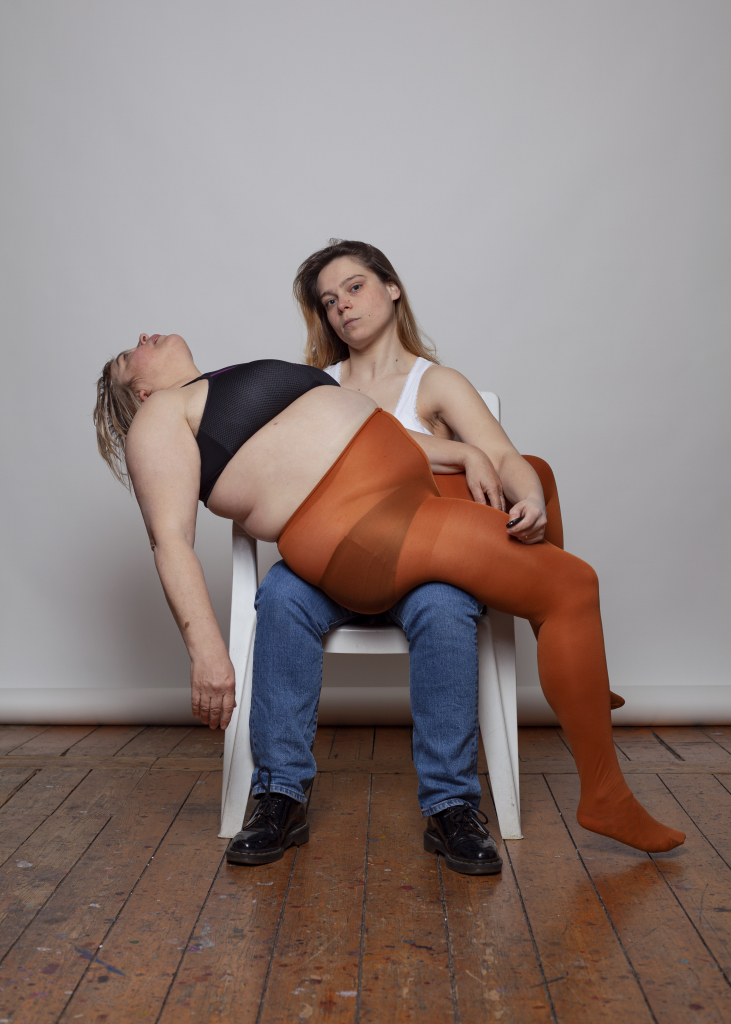 Pippilotta Yerna (1994, the Netherlands), She is the canary in the coalmine of a dying empire,
Royal Academy of Art, The Hague

Not everyone would dare to give it a go: staging the death of your very own mother. Not just once, but several times. Still, in her project She is the canary in the coalmine of a dying empire, Pippilotta Yerna manages to do just that. There lies her mother, washed up on the boulders along a river, in a strange position and with wide-open eyes on the floor of an empty room, on the hard concrete of a courtyard, with a head wound and yellow rubber gloves. Her daughter sits on top of the body and captures the gruesome scene with a telephoto lens. What’s going on here?
How do you defuse what you fear most? For Yerna, the answer is clear: with the camera. As evidenced by her multimedia installation, she has a close, symbiotic bond with her mother. The installation is pleasantly tactile and includes those macabre, absurdist images, a publication, a text message conversation, postcards, and a crazy kind of suit with a life-size picture of her mother in her underwear. The mother named her daughter Pippilotta; the now grown-up Pippilotta calls her mother ‘Mamski’. “Could it be possible to die together someday,” the daughter writes in her book – that’s how symbiotic they are.
With her camera, Yerna tries to control, and perhaps influence the inevitable – her mother’s mortality. This resulted in a graduation project that sparkles with individuality and originality. Yerna’s photos are simultaneously playful and serious. They show humour and guts. Additionally, mother and daughter have performed the scenes extremely professionally. Both took the wild plan to photographically construct the mother’s death down to the last detail.

Announcement of the winner
On December 16, the jury will announce the winner of an incentive prize of 5,000 euros from the Steenbergen Foundation. Published at the same time will be the jury’s report that includes a critical review of the quality of the graduation exhibition at each art academy. This year, the jury is made up of Merel Bem (jury chairperson and art critic & writer), Alexandre Furtado Melville (photographer and writer) and Teun van der Heijden (photography book designer).
Just as with previous editions, this year will also witness the bestowal of a public’s choice award. To determine this winner, the public can vote for their favourite work while visiting the gallery from October 21 through November 28, 2021. The winner of the public’s choice award will be announced during the award presentations on December 16.

Previous Steenbergen Stipendium awards were given to Viktor Naumovski (2019), Daniël Siegersma (2018), Eline Benjamins (2017), Kimmo Virtanen (2016), Esther Hovers (2015), Jaya Pelupessy (2013), Willem Popelier (2008), Wytske van Keulen (2005), Petra Stavast (2002) and Andrea Stultiens (1998).
The nomination of the projects goes hand in hand with identifying new developments in photography and provides insight into how the new generation is using the medium. These findings are expressed every year in the jury’s report which also sheds light on the quality of the various degree programmes.

The gallery of honour of Dutch photography
The Collection illuminated ... by Artificial Intelligence
Imagination