The Nederlands Fotomuseum presents Attack, the first exhibition by Belgian artist Katrien De Blauwer presented in the Netherlands. De Blauwer has been working on a large and powerful oeuvre of photomontages over the course of the last twenty years; however, she only started to exhibit them a few years ago. Attack is a reference to how the artist creates her images. She cuts images from old international magazines on impulse, which she then combines intuitively. This results in new images. Her clippings most often show images of (parts of) women. In this way, De Blauwer is using her work to respond to the image of the western woman as it is visualised and published in magazines. De Blauwer is one of today’s most distinguished photomontage artists. Attack shows a collection of her works and will be exhibited at the Nederlands Fotomuseum from 16 November 2019 until 9 February 2020.

Work method
De Blauwer uses simple tools: scissors, paper, glue and pencil; she has recently started using paint as well. She gets her images from international illustrated magazines, preferably from the years 1920 to 1969. Katrien De Blauwer doesn't take photographs; instead, she considers herself a 'photographer without a camera'. She chooses obsessively and intuitively, cuts photographs in half or cuts out fragments that she combines with other clippings to create a powerful, new image. She works in a very focused manner, as if in a trance, cutting out one image after another. Her production level is high, the cuts are always very precise and instantly hit the mark.

The cutting of images leads to other, partially new images: new impressions are created, new meanings, as well new poetry. By combining fragments of images, they begin to relate to each other; a story develops in the mind of the beholder, no matter how short the story is. The combinations made by De Blauwer are not obvious. Between the images, she leaves room for suggestion and interpretation. She uses an old principle of image editing that is well-known in the film industry: place two images next to each other and a 'third meaning' arises. That is also why her most important sources of inspiration are from the world of cinema: Michelangelo Antonioni, Jean-Luc Godard and Andrej Tarkovski. Some of her works have a strong cinematic character, they tell stories, include a certain amount of suspense, or seem to originate straight from an imaginary film noir or from the nouvelle vague cinema, the French New Wave movement. 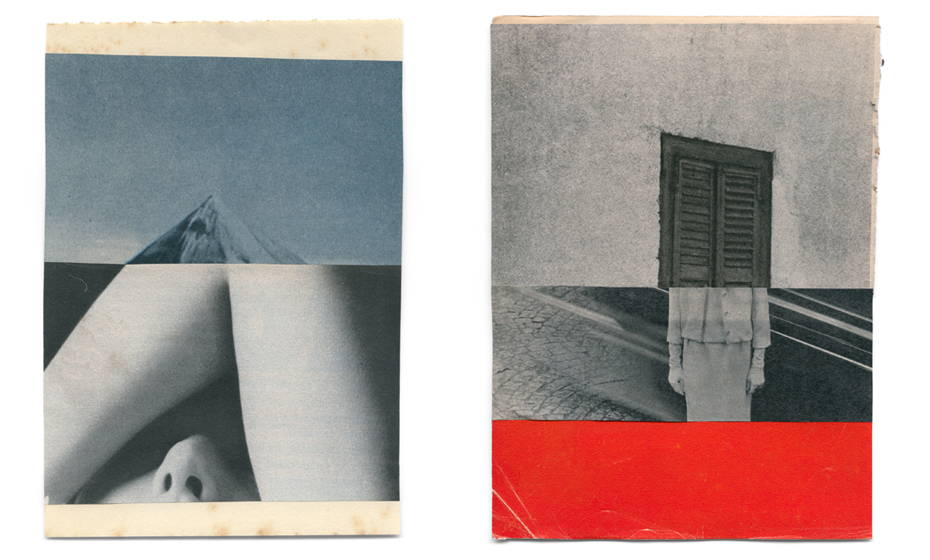 Reflection on women
De Blauwer’s most prominent theme is 'women', and more precisely, the image of women as it is published in magazines. Her work is a personal reaction to or reflection on these images. It reveals an affinity with fashion, dance, and eroticism. Movements, gestures, and poses suggest a choreography. We see female bodies, arms and legs, torsos, a hand, a mouth, free-flowing hair. We see makeup, lingerie, fashionable clothing, elegance and flair, with undertones and overtones of romance and desire, Sehnsucht. At the same time, there is tension, friction, and a sense of unease. The hard cuts in the bodies expose a darker side, smouldering fears, bad dreams, death.

The exhibition includes a selection of works from different periods. In addition to the collages, the audience can see 'notebooks' showing material De Blauwer is interested in but hasn't used yet. The opening is on 15 November and will be attended by the artist.

Biography
Katrien De Blauwer (Ronse-Renaix, Belgium, 1969) is a visual artist. She studied at the KASK (School of Arts) in Gent and at the Antwerp Fashion Department. She lives and works in Antwerp. Her work is represented by the Les Filles du Calvaire art gallery in Paris. De Blauwer has published several books on her work, including I do not want to disappear silently into the night (2014), Stills (2016), When I Was a Boy (2018), Why I Hate Cars (2019), Dirty Scenes (2019), I Close My Eyes Then I Drift Away (2019) and cheveux longs… cheveux courts (2019).

Katrien De Blauwer | Attack has been organised in collaboration with the Les Filles du Calvaire art gallery in Paris and Ffotogallery in Cardiff.