As of June, the Nederlands Fotomuseum presents the exhibition Ellen Thorbecke’s China, showcasing photographs and photo books made in China in the 1930s by collection photographer Ellen Thorbecke. The exhibition tells the story of a woman who holds a unique position in Dutch photography. Her small yet extraordinary photo archive, one of the Nederlands Fotomuseum Collection’s true gems, shows rare images of everyday life in China during that era. She photographed with an open mind and as a result Ellen Thorbecke’s images are still relevant and immensely popular in China today.

Compelling photographer
In 1931, Ellen Thorbecke left Berlin for China to be reunited with her beloved husband Willem Thorbecke, who had been appointed as an envoy in China on behalf of the Netherlands. Before she left for China, she bought her first camera, asshe was planning to work in China as a correspondent for the Berlin newspapers. To illustrate her articles, she captured a series of portraits and street scenes in the Chinese countryside and in the cities of Beijing, Shanghai and Hong Kong. This was during the era when the idea of ‘East Meets West’ was gaining ground and a number of Western writers, filmmakers and artists were shining the spotlight on China.

Being a journalist from origin, Thorbecke gradually developed into a compelling photographer who infused her photographs with fully-engaged observation of the people and places she visited. The exhibition Ellen Thorbecke’s China presents photographs that capturethe changing identity of the young Chinese Republic  between centuries-old traditions and Western modernisation. Her images range from those that refer to traditional Chinese role patterns – such as arranged marriages at a young age – to modern portraits showing the desire for freedom and independence. 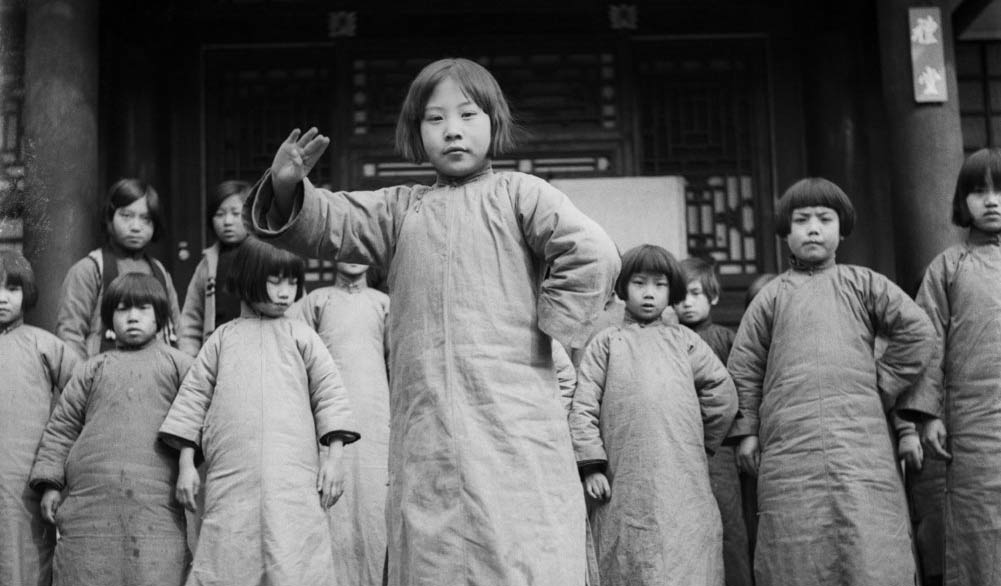 Unique book publications
Ellen Thorbecke created several photo books for which she herself wrote the texts, and for which Austrian artist Friedrich H. Schiff made additional cartoonish drawings and watercolour paintings. Ellen Thorbecke’s China takes the visitor on a journey through her extraordinary photo books, including Peking Studies (1934) and People in China (1935). All of these publications allude to a warm interest in Chinese residents from all walks of life, and an understanding of the international political arena in the turbulence of the interwar period.

About Ellen Thorbecke
Ellen Thorbecke (born Ellen Kolban, Wilmersdorf (near Berlin), 1902-1973) was an interesting artist in many ways. She was opinionated, had broad cultural and political interests, and was incredibly gifted with artistic talent. During the liberal years of Germany’s Weimar Republic, she sought her own path and pursued a social career. Her photography is quite unique, as very few images of everyday life in China from that period  stillexist.

Collection gem
Ellen Thorbecke’s visual stories make her oeuvre one of the most precious gems in the Nederlands Fotomuseum’s collection, and a unique document of its time. In 2008, the Thorbecke family entrusted her photo archive to the museum. It consists of 638 black and white negatives, of which 166 were made in China.

Curator of the exhibition
The exhibition has been assembled by Ruben Lundgren. He has been living in Beijing since 2007 where he is working as a photojournalist for daily newspapers  like de Volkskrant, and as an independent curator of Chinese photography. While researching the history of the Chinese photo book in 2015, he became fascinated with Ellen Thorbecke and started anin-depth research about her. In close cooperation with the Nederlands Fotomuseum, Lundgren has skilfully and respectfully unlocked the archive of Ellen Thorbecke for the public.

Publication
The exhibition is accompanied by the monograph Ellen Thorbecke. From Peking to Paris, compiled by Ruben Lundgren in collaboration with Rik Suermondt, art historian and discoverer of Thorbecke’s archive. The book shows rare images of daily life in Beijing, Shanghai, Hong Kong, Paris and the Middle East in the 1930s and 1940s. These were the places where Thorbecke lived and worked during her lifetime, which form the guiding principle of the publication. It is the first monograph in an ongoing series about its collection that the Nederlands Fotomuseum has been releasing since 2019, published by Lecturis.

The gallery of honour of Dutch photography
Johan van der Keuken: The Art I Love Most